A group of local residents are working to make the transition to Canada a little easier for a family who fled Ukraine and is now living in Port Dover. These long-time residents would like to introduce the community to the Karida family and are asking for support to get them settled here.

Zhenya and Liliya Karida will turn 40 next year. Their nine-year-old daughter Afina loves to read and learn languages. Besides her native tongue of Russian and some Ukrainian, she was working on her French and English before even coming to Canada. Their five-year-old daughter Yuna loves to laugh and dance and meet new people.

This family had lived in the city of Mariupol in Ukraine since 2008. Starting in 2014, the family had observed volleys and explosions on the horizon from time to time. On February 24th when it started again, they did not attach much importance to it, thinking that it would end quickly as it had before. In addition, there were no messages on TV or the radio about what was happening.

As the bombs and fighting continued to get increasingly closer, the family decided they needed to leave and move deeper into the region but, even then, they did not understand the scale of the situation so they only took a couple of changes of clothing and their toothbrushes – expecting they would return home in a few days.

They moved further away, and stayed at the flat of a friend. Four days later, the fighting had arrived to their new location, so they moved to the basement of the apartment building. They stayed there with 70 other people.

The family explained that the women and children did not leave the basement for three weeks. In complete darkness, the men were the real heroes at this time. They ventured outside in search of food. Using a found vehicle with flattened tires, they would drive to the destroyed food warehouses and shops in order to bring back food and drink. They also delivered food to those seeking shelter in the streets.

They put their lives in danger everyday but still managed to find medicine, baby food, diapers and more. They helped to extinguish burning homes, found people that needed shelter and brought them back and, between shootings, buried the dead – many of whom died down below from heart attacks, smoke inhalation and, probably, poisonous gases. Noticing that the colour of the skin and the eyes of their wives and children had changed, the men took car batteries and hooked up strings of lights to try to get some light.

Their location was near the Azovstal plant so frequently the fighting occurred within close range. When this occurred, the moms made earplugs out of candle wax and pieces of cotton to try to protect the ear drums of her children and to allow them to sleep peacefully.

At one point, the fighting was in their building on the floor just above their heads. After the noise ceased, Zhenya was horrified to go upstairs and find a Ukrainian soldier who had died, the heat had been so intense that his gun was partially melted to his body.

A short time later, everybody in the basement witnessed a Ukrainian soldier come down the stairs completely engulfed in flames. They ran to smother him with blankets. Liliya sat with the soldier, his name was Viktor, and she got a phone number for his family. When he died the next day, she was the one to call his parents. She felt it was important that they knew where their son was, what had happened to him, and that he had been cared for at the end.

Another soldier arrived and said ‘we will come back for you this evening.’ They never returned.
That same day they lost another friend, Svetlana. The building was set on fire by the shelling and it burned for the next two days. The extreme heat in the basement was suffocating and it melted plastic pipes releasing toxic smoke.

After three weeks and intensifying fighting, they knew they had to leave. They were terrified to go up, but they knew it was their only choice. The family left the basement and started walking. Cut off from the other part of the city by continued fighting and destroyed bridges, the family had no choice but to head towards Russia. They walked for kilometres with their two little girls. Liliya said they were exhausted and dirty.

Fortunately, Zhenya and Liliya have some cousins in Russia and they were able to stay with them for three months. When asked why they didn’t stay in Russia they looked with surprise and said “because… it’s Russia. It is not a good place to live.”

While in Russia, Liliya searched all over the world, looking for work for her husband. Originally schooled in academics to be an English teacher, he had gone back to school at the Odessa Agrarian University and received his degree in agronomy and breeding. In Ukraine he did some work with hemp. By chance, a job was found in Jarvis, Ontario.

They applied to come to Canada and were able to get a work visa. They were also granted the $6000 that the Canadian government was giving Ukrainian refugees and temporary health cards.
They made their way through St. Petersburg to Estonia, Latvia, Germany and finally to France. A day later, a volunteer organization paid for Zhenya to come to Canada. Liliya and their children followed a couple months later.

When Zhenya arrived in Canada, he was met at the airport by his new employer and they provided accommodation for him on site. A local resident took it upon herself to take him and others shopping for groceries every weekend.

The company has since purchased a vehicle for everyone to share. Because Zhenya lives the farthest, he does get to bring the vehicle home in the evening but that also means he does not get home until he has dropped everyone else off. As a result, his shift which ends at 4:30 usually keeps him away from his family until 7 o’clock or later. Similarly, on the weekends he is driving the vehicle to pick people up to take them shopping.

A number of local residents heard of their arrival to their Port Dover rental on October 31 and this group has taken it upon themselves to help the family out.

The group is trying to raise funds to get them a car so that Zhenya can get home at a reasonable time and spend time with his family. Organizations including Art With Heart and Spectrum Gymnastics are willing to donate activities for the girls but the family is not able to get them there with dad not being home until late and mom does not want to burden people asking for rides.

Local residents obtained a wagon so Liliya can walk to the food bank and a group of Port Dover residents are working to provide their basic needs.

The family had hoped something survived of their life in Mariupol. While seeking safety in Russia, Zhenya was able to make a trip back to Mariupol and found everything they owned had been reduced to rubble and ash.

The couple shared pictures with their new Port Dover friends who said it is possible to sort of make out a stove and microwave and one vase but nothing else was left. When the Port Dover group expressed sorrow, they were told ‘we are just happy that we are all alive.’

Their local support group says the family has the most important things that they need, but they are going to need a place to rent as the current accommodation is only available until May. At that time, they may require the community’s support again to furnish a new home.

So, what do they need?

The Port Dover group that is working with them say what they need most as a family is to have dad at home earlier in the evening.

Recently, an Amber Alert went off on their phone and all of them were terrified, not knowing what was happening. Both daughters literally dropped to the floor and covered their heads.

Their older daughter is experiencing a lot of anxiety. She saw an airplane flying overhead and was terrified, afraid it was going to drop a bomb. A few days later, a loud noise outside once again caused the nine year-old to hit the ground and cover her head.

The family feels getting the girls involved in some after-school activities would be helpful. But more important, they believe having their father home earlier in the evening will make her feel better.

The local group supporting the family says a vehicle of their own is what the family needs most. “Our impression of them is that they are hard-working, honest, kind and giving, and are devastated that they are needing assistance. But they do,” say this local support group.

That group is close to having enough funds for a vehicle, but just recently learned that the insurance will be more than the car.

A Facebook group called ‘Port Dover Support for Ukrainian Refugees’ is open for everyone to join and learn more.

Anyone interested in making a donation of any amount can e-transfer funds online to:
ukrainianfundraiser519@gmail.com

Currently, all money raised will go to support the Karida family now living in Port Dover. 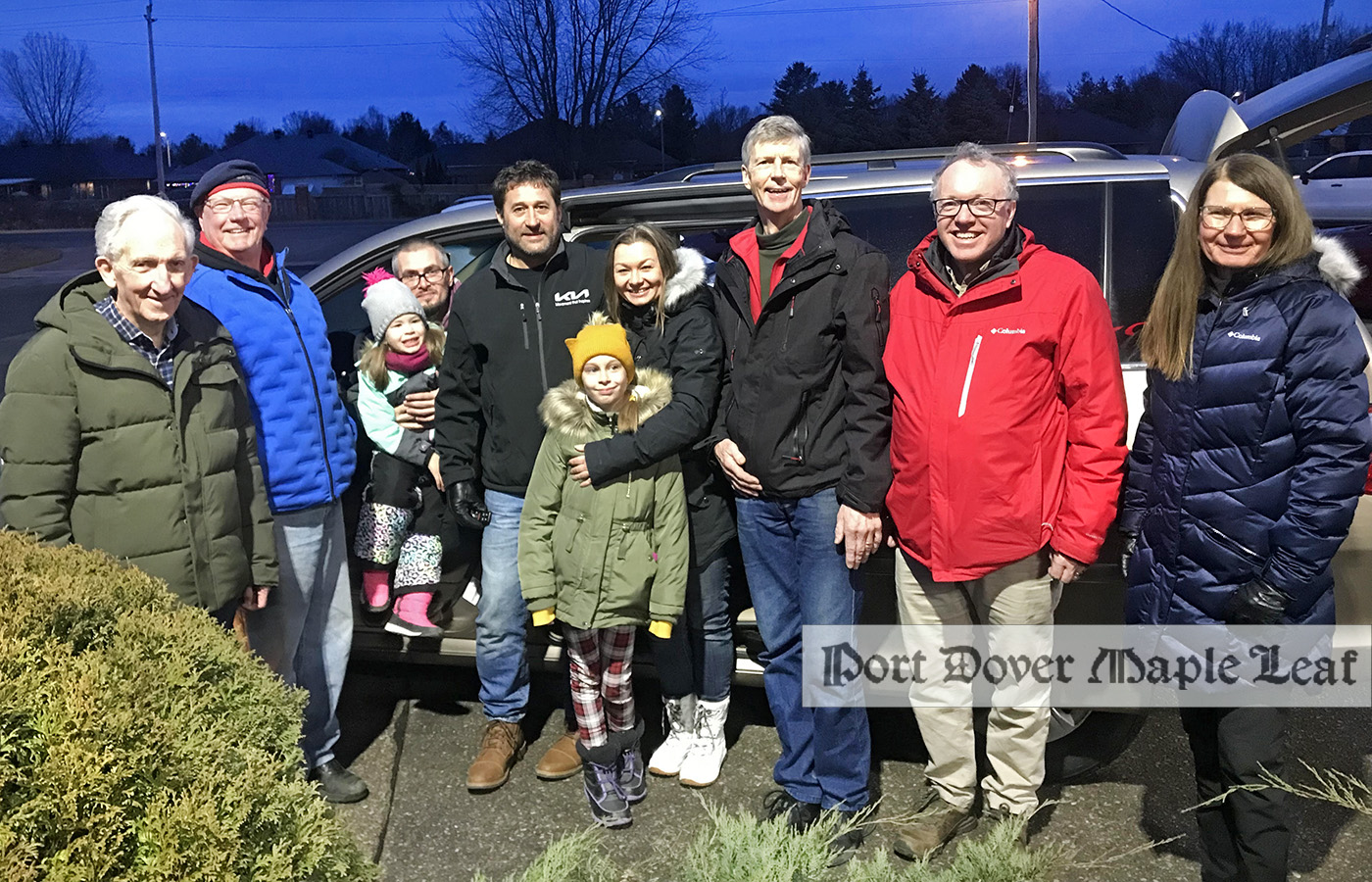 A true community effort has given the Karida family of Port Dover a wonderful Christmas gift.

Zhenya and Lilya Karida with their daughters Afina, 9, and Yuna, 5, fled Mariupol, Ukraine when fighting came to their home.

On Thursday evening, Zhenya was handed the keys to a used van which a local support group says is truly life-changing for this family.