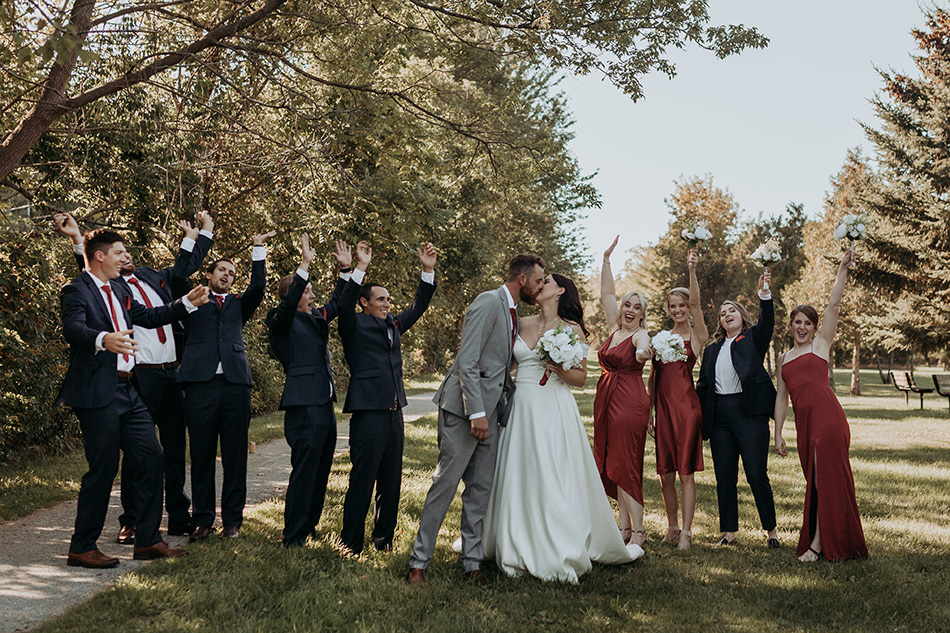 This match and marriage was made in Port Dover

The two 30-year-olds have been friends since they met in grade 4 at Doverwood School.

Six years ago they became a couple. In October of 2020 they got engaged.

Two years ago they bought a house in Simcoe even though Kevin has been working for a Hamilton company as a millwright for eight years. It’s a long commute but the couple can’t imagine raising a family anywhere else.

Both come from long-time Port Dover and Norfolk County families. 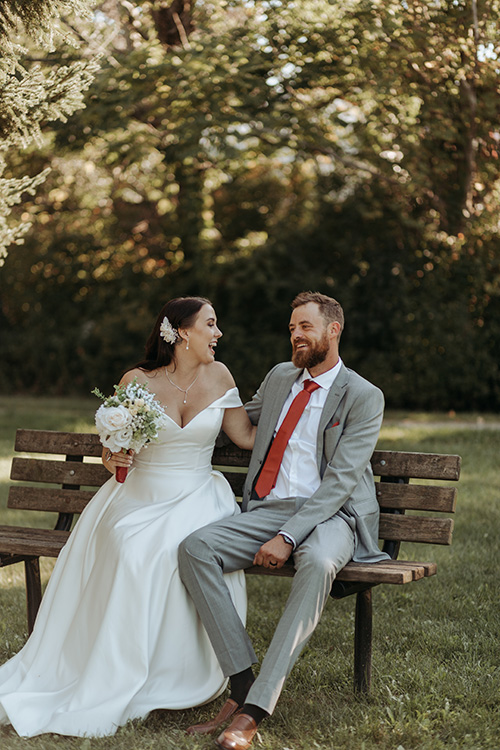 “My mom was Robin Watkinson and I’m descended from Thomas A. Ivey [the family with the huge greenhouse business],” says Amanda. “And Kevin is a Mummery from a whole family of fishermen.”

Last spring Amanda finished a social services diploma at Fanshawe Simcoe. After an eight-week placement in Brantford over the summer, she decided to hold off on her new career until after the wedding.

She returned to working at the Beach House in Port Dover – where she has worked for 15 years, as well as some part-time work at Shoppers Drug Mart.

The couple was thrilled to discover Amanda was 3-4 weeks pregnant on their wedding day.

Everything was in place for their future.

The wedding they originally planned was to be at Port Dover Yacht Club – where her late mother had been the first female commodore.

But in the midst of Covid-19 and constantly changing restrictions, they couldn’t plan an indoor event.

“We didn’t want to postpone our wedding,” says Amanda. “Then my dad offered his backyard and we had the place.”

Amanda made most of the arrangements, but says both families pitched in to help.

They lucked out on a beautiful sunny day – lucky indeed because they didn’t really have a back-up plan. 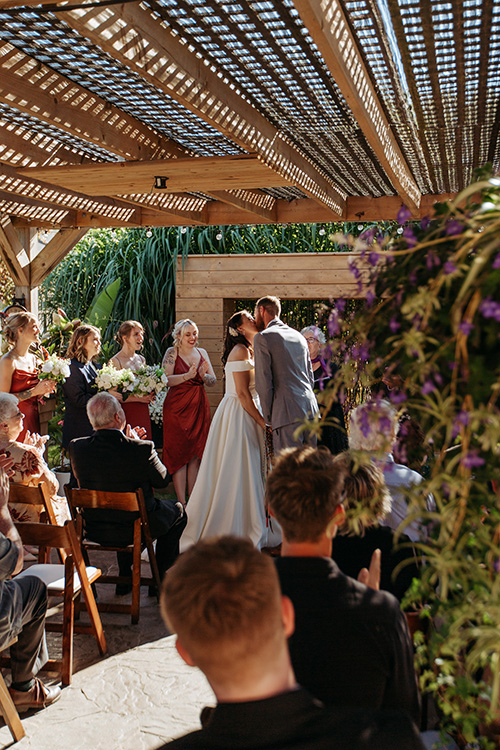 Amanda and Kevin exchanged vows on her father’s deck in a ceremony officiated by Peggy Guiler, a long-time family friend who had known her mother well.

The guest list was limited to 40 to observe social spacing requirements.

The bridesmaids and groomsmen were all long-time friends, most dating back to grade 4. Rebeka McFarlane was Maid of Honour while Eryn Stanley, Silver Smith, Emeline Depratto and Jessica Bigg were bridesmaids.

Because she had just started medical school in Ireland, Jessica couldn’t attend the wedding – but she sent a video. 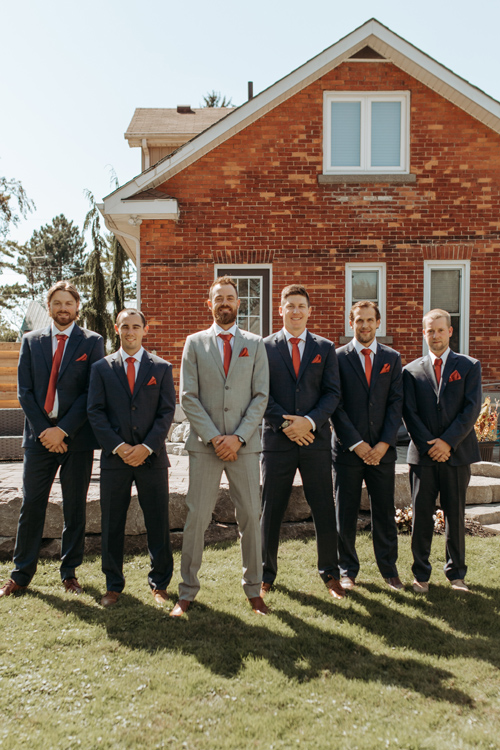 Amanda and Kevin picked out most of the decorations from the dollar store.

Other decorations came from J & K Wedding Rentals and Services.

After the ceremony the bridal party walked over to Silver Lake Park for photos. Anyssa Hamilton and Isaac Riddle from Grace & Glenwood Photography took the pictures.

When it came to music they opted to do that as well. Kevin made the playlist on his phone. Then they rented a microphone and speaker from Black Creek Music.

Amanda says there was no question about the song for their first dance.

“Kevin found the song, Anchor by Skillet,” says Amanda. “He sent it to me and we both knew that was it.”

Amanda says the food from caterer Tracy Winkworth was wonderful.

Covid impacted everything – even shopping for dresses. 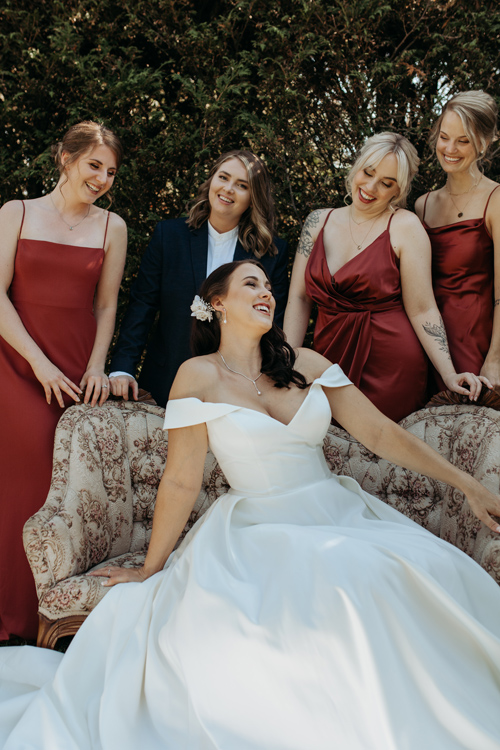 Amanda chose a coppery red for the groomsmen’s ties and bridesmaids’ dresses. Each bridesmaid found her own style of dress in the chosen colour.

Amanda ordered her wedding gown online without ever trying it on, and was pleased it was on sale.

When it arrived, she tried it on at her mother-in-law’s house and they celebrated with champagne and a few tears.

The few alterations it needed were done by Jane Johnstone-Baker.

Amanda used flowers from her mother’s bridal hat to make her own headpiece.

On the day of the wedding Holly Szatrowski did the bridal party’s hair, while Amanda did their make-up.

The theme had originally been nautical, but it changed to more of a Love Story theme – a Port Dover love story.

There was no exotic honeymoon. Instead the couple opted for a small staycation.

Currently, the couple is preparing for the arrival of their daughter Ashton, who is due right around Mother’s Day.