Paul Boulanger is chair of the local Lions’ organizing committee which has co-ordinated the day’s events since 1954 along with other local service groups and partners.

The usual day-long program is planned to return starting at 9 am with the Soap Box Derby organized by the Kinsmen Club of Port Dover.

At 11 am, the focus moves to the pier with the popular Boat Parade at the waterfront which sees both commercial tugs and pleasure boats decorated with flags and streamers.

At 11:15 the Canine Classic Canada Day Dog Show gets underway in Powell Park organized in past years by Kristine Hill. A wide range of dogs are shown with prizes awarded.

The largest event of the day is the Canada Day Calithumpian Parade that starts at 2 pm and travels the length of Main Street and returns on St. George Street to the delight of thousands of people along the parade route.

Mr Boulanger is organizing music for the parade with three marching bands already signed to attend on Canada Day. They are the Optimist Alumni Drum and Bugle Corps, Top Hats Marching Band and Paris Port Dover Pipe Band. As well, Marr’s Holler and Gentlemen of Harmony will play throughout the parade on floats.

Everyone is invited to participate in the parade by entering a float or dressing up in costume to entertain the crowds. There is no registration required but organizers insist that all vehicles in the parade must be decorated.

Parade participants should gather along the north end of St. George Street at least an hour before parade time for judging. Prizes are awarded in several categories for decorated floats.

The day’s events end with a fireworks show shortly after dark from Silver Lake Park.

Mr Boulanger says the Lions are hoping those who are able will help support the club with a donation to the Canada Day program.

The Lions arranged with Port Dover branch of Scotiabank to accept any size donation towards the Canada Day parade, bands or fireworks. Staff at the Main Street bank branch can accept the donation and while no tax receipt can be issued, the entire donation will go to the Canada Day program.

As well, the popular Canada Day buttons return for 2022 selling for $3 each or two buttons for $5. They will be available from Lions, in some stores during June and on Canada Day. Wearing a button shows support for the day’s events.

Canada Day, and previously Dominion Day, has seen a celebration in Port Dover since the Canadian confederation in 1867. During the years of World War One and World War Two when larger cities cancelled parades, Port Dover continued to have a celebration. During the past two years of COVID-19 restrictions, a scaled down “mini-parade” and fireworks kept the tradition alive. 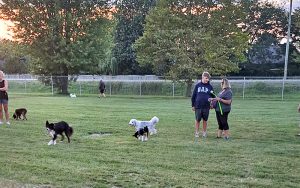 THE Doverwood Dog Park has opened at the large site of the former Doverwood Public School next to Kinsmen Park on Hamilton Plank Road. The 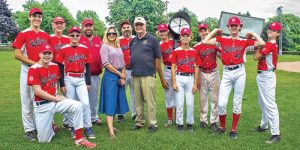 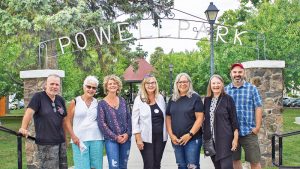 Art in the Park & Sidewalk Sales this weekend

PORT Dover Summer Festival’s Art in the Park and sidewalk sales are back this Saturday and Sunday in downtown Powell Park. Since 1973, the third